Corporate Austerity Not the Answer in 2012

Posted on February 3, 2012 by populareconomicsblog

Why so much gloom and tentativeness about U.S. economic growth when all the indicators are looking up for 2012? For instance, the Conference Board’s Index of Leading Economic Indicators again showed positive growth ahead. It rose 0.4 percent with 7 of its 10 indicators positive.

And the Q4 ‘advance’ estimate of GDP growth was 2.8 percent, almost double Q3. Equipment and software, which includes autos and exports, was the largest component. It would be even higher if corporation would use more of their cash hoard for job creation, rather than speculative investments and excessive executive compensation. 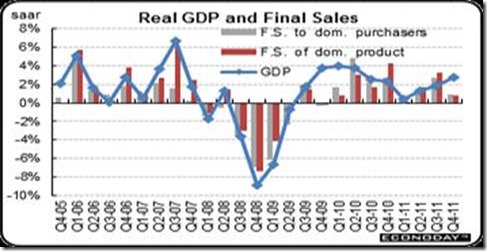 Could it be because of the euro’s problems? “This somewhat positive outlook for a strengthening domestic economy would seem to be at odds with a global economy that is losing some steam,” said Ken Goldstein, a Conference Board economist. “Looking ahead, the big question remains whether cooling conditions elsewhere will limit domestic growth or, conversely, growth in the U.S. will lend some economic support to the rest of the globe.”

But JP Morgan’s President Jamie Dimon said even the damage from a default of Greek debt would be “negligible”, in a CNBC interview at the Davos, Switzerland economic summit. So what’s the problem? The austerity (meaning deficit) hawks have their hands around the throats of European commerce. Why? In the mistaken belief that more stimulus spending will increase debt without actually causing more growth.

But Professor Robert Shiller, co-author of Animal Spirits with Nobelist George Akerlof, calls it debt delusion. When the private sector, including households, becomes over indebted, they begin to save more and spend less. But if governments do it at the same time, it causes a downward spiral towards deflation and recession or depression. This comes from the belief of fiscal conservatives that public borrowing takes money away from private users.

That, however, isn’t the case, because the private sector has plenty of funds, but is hoarding them (some $2 trillion in cash to date), rather than creating more jobs. So if governments are also hoarding their monies—in the form of trade or currency surpluses, as is happening in most of Europe today, then the bottom falls out of the economy. I.e., if no one is buying and everyone is saving, then no business gets done. This should be self-evident, because such a truth has been known since the Great Depression and New Deal that established our modern safety net, and ultimately put so many people back to work.

Rutgers Econ Professor James Livingston has explained this transformation best in recent papers and articles. The great wealth shift away from wage earners-consumers to corporate profits began during the Great Depression, according to Livingston: “The underlying cause of that economic disaster (the Great Depression of 1929-33, 1937-38) was a fundamental shift of income shares away from wages/consumption to corporate profits that produced a tidal wave of surplus capital that could not be profitably invested in goods production—and, in fact, was not invested in good production…and that, on the other hand, produced the tidal wave of surplus capital which produced the stock market bubble of the late-1920s.”

And in a recent New York Times Op-ed, It’s Consumer Spending, Stupid, Livingston expands on the reasons for our current prolonged malaise:

“As an economic historian who has been studying American capitalism for 35 years, I’m going to let you in on the best-kept secret of the last century: private investment — that is, using business profits to increase productivity and output — doesn’t actually drive economic growth. Consumer debt and government spending do. Private investment isn’t even necessary to promote growth.”

This, to put it mildly, explodes that rationale used by Wall Street and corporations to justify not passing on more of their profits to consumers—80 percent of which are wage and salary earners. The reasoning being that it is their profits that drive growth.

Professor Livingston says, “Economists will tell you that private business investment causes growth because it pays for the new plant or equipment that creates jobs, improves labor productivity and increases workers’ incomes. As a result, you’ll hear politicians insisting that more incentives for private investors — lower taxes on corporate profits — will lead to faster and better-balanced growth.”

Not so, says Livingston, “But history shows that this is wrong. Between 1900 and 2000, real gross domestic product per capita (the output of goods and services per person) grew more than 600 percent. Meanwhile, net business investment declined 70 percent as a share of G.D.P. What’s more, in 1900 almost all investment came from the private sector — from companies, not from government — whereas in 2000, most investment was either from government spending (out of tax revenues) or “residential investment,” which means consumer spending on housing, rather than business expenditure on plants, equipment and labor.

“In other words, over the course of the last century, net business investment atrophied while G.D.P. per capita increased spectacularly. And the source of that growth? Increased consumer spending, coupled with and amplified by government outlays.”

Much has been written already about the record profits of both financial and non-financial corporations that have drained consumption, and that is the main reason why average real household incomes have actually declined over the past 30 years. In fact, corporate profits today are highest in history as a percentage of GDP.

And this could be actually endangering economic growth by causing rampant market speculation, rather than productive investments, say many pundits, including Professor Livingston: “So corporate profits do not drive economic growth — they’re just restless sums of surplus capital, ready to flood speculative markets at home and abroad. In the 1920s, they inflated the stock market bubble, and then caused the Great Crash. Since the Reagan revolution, these superfluous profits have fed corporate mergers and takeovers, driven the dot-com craze, financed the “shadow banking” system of hedge funds and securitized investment vehicles, fueled monetary meltdowns in every hemisphere and inflated the housing bubble.”

How to cure the record income inequality that has resulted from so much power going to Wall Street and the corporations? Let us return to the income tax brackets that brought on so much prosperity to the middle class during the 1960s and 1970s. What were they?

So it should be a no-brainer, if we want to see American growth restored to historical levels. Higher taxes have meant more growth, because public revenues are invested in growth-inducing infrastructure, better public safety, and upward mobility inducing education, for starters. Whereas lower taxes mean higher debts, with less growth and more speculative risk-taking to show for it. Why history is so easily forgotten may be a question only psychologists can answer.