Posted on May 29, 2012 by populareconomicsblog

Even the S&P Case-Shiller Home Price Index, a 3-month average of all existing-home prices that lags all other indexes—such as FHFA and CoreLogic—says home prices are finally showing signs of life. Why? Inventories are declining as investors in particular are picking up the best bargains. Also, prices have fallen faster than incomes, so that housing is cheaper than ever. 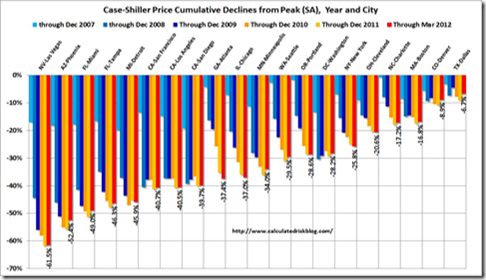 Case-Shiller home prices were up 0.1 percent in March for the adjusted composite 20 index and up 0.2 percent in February. This is the first back-to-back monthly gain since the spring of 2010, said Econoday. The year-on-year rate of minus 2.6 percent is the best reading since December 2010. Phoenix is really on the rebound with Miami, Tampa, Minneapolis and Dallas all showing a run of stand-out strength. Phoenix had the largest increase, showing that cities with the biggest price busts continue their boom and bust ways.

The median price of existing homes shot up 10 percent in April as well, as housing inventories have declined to 6.6 months. And that is at the current slow sales pace. Should it pick up this year, inventories could decline to their historical low of 4 percent giving a further boost to prices.

This is because total existing-home sales, which are completed transactions that include single-family homes, townhomes, condominiums and co-ops, increased 3.4 percent to a seasonally adjusted annual rate of 4.62 million in April.

And we are seeing larger price rises in the FHFA price index of homes with Fannie Mae/Freddie Mac owned mortgages. Home prices climbed 1.8 percent on a seasonally adjusted basis in March, said the Federal Housing Finance Agency. Year-on-year, prices rose 2 percent. For the first quarter as a whole, prices rose 0.6 percent from fourth-quarter levels. “Increased affordability and a somewhat smaller inventory of homes for sale are positively impacting house prices,” said Andrew Leventis, FHFA principal economist. The FHFA is a purchase-only index based on transactions bought or guaranteed by Fannie Mae or Freddie Mac, as we said.

Lastly, default rates continue their decline, meaning fewer REO (bank-owned) properties are coming on the market. As far as delinquencies, MBA Chief Economist Jay Brinkmann says we are “halfway back” to normal of around 5 percent historically, though this does not include loans in foreclosure, which are still near record highs. We anticipate further declines in both default and foreclosure rates, as HARP 2.0 Fannie/Freddie loan modification activity that ignores negative equity is going through the roof. Some lenders are reporting up to 18 days to initial underwriting of submissions, because of the huge backlog.

The Mortgage Banker Association’s National Delinquency Survey (NDS) covers about “42.9 million first-lien mortgages on one- to four-unit residential properties” and is “estimated to cover around 88 percent of the outstanding first-lien mortgages in the market,” said the press release. This gives about 5.8 million loans delinquent or in the foreclosure process.

So increased affordability, combined with declining inventories seems to be finally spurring homebuyers to come out of their rentals (or parents’ households) to make that most important of investments—a home of their own.