Posted on September 11, 2012 by populareconomicsblog

Calculated Risk just reported that Lender Processing Services (LPS) released their Mortgage Monitor report for July with some good news. According to LPS, 7.03 percent of mortgages were delinquent in July, down from 7.14 percent in June, and down from 7.80 percent in July 2011.

“Nationally, 18 percent of borrowers who are current on their loan payments are ‘underwater’ (owing more on the mortgage than the home’s current market value),” continued Calculated Risk from a Herb Blecher report, “ranging from a low of 0.4 percent in Wyoming to nearly 55 percent in Nevada. As negative equity increases, we see corresponding increases in the number of new problem loans. In Nevada and Florida, two of the states with the highest percentage of underwater borrowers, more than three percent of borrowers who were up to date on their payments are 60 or more days delinquent six months later. This suggests that further home price declines – should they occur – could jeopardize recent improvements.” 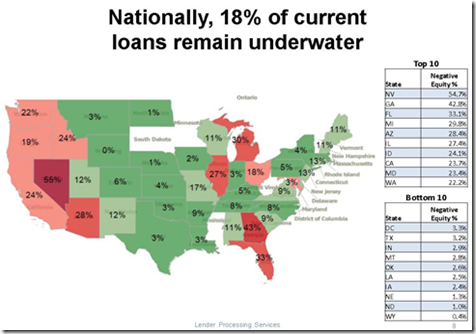 But we are seeing that real estate prices are beginning to climb in those same states that gained, then lost the most equity during the bubble and consequent bust. “Home prices gained in the second quarter,” says David M. Blitzer, Chairman of the Index Committee at Standard and Poor’s Dow Jones Indices. “In this month’s report all three composites and all 20 cities improved both in June and through the entire second quarter of 2012. All 20 cities and both monthly Composites rose for the second consecutive month. It would have been a third consecutive month had we not seen home prices fall in Detroit back in April.” 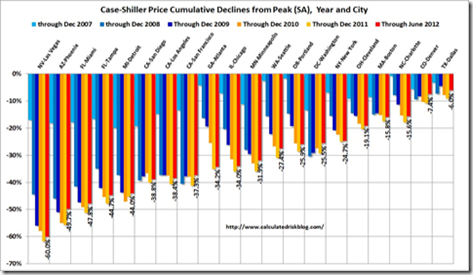 And Housing Wire reports that “a sustained uptick in home prices in more metros caused the number of improving housing markets across the nation to rise to 99 in September from 80 the previous month, according to the National Association of Home Builders and First American Home Price Index.

This is while there are already principal reductions happening for the non-Fannie and Freddie home loans. Billions worth of mortgages once handled by Saxon Mortgage Services received more principal write downs since Ocwen Financial Corp. took over the portfolio.

Ocwen, now the largest subprime servicer in the U.S., completed its October 2011 acquisition of Saxon from Morgan Stanley in April 2012.More than $22 billion in mortgages transferred through the deal.

Just 11 percent of all modifications done on these loans included a principal reduction as of May. But in the three months since, Ocwen wrote down principal on 56 percent of modifications on Saxon loans, according to Laurie Goodman, chief analyst at Amherst Securities.

So now we are waiting for implementation of the recent National Mortgage Settlement Act that Wells Fargo, Citibank, Bank of America, Ally, and JPMorgan Chase agreed to. Among other things, it appropriates $25 billion to both settle borrowers’ claims of fraudulent foreclosure practices, but also help homeowners needing loan modifications now, including first and second lien principal reduction that aren’t Fannie Mae or Freddie Mac insured.  (Those mortgages are covered by the HARP 2.0 loan modification program).  The servicers are required to work off up to $17 billion in principal reduction loan modifications and other forms of loss mitigation nationwide. Eligible borrowers will by contacted by the Servicers and will receive letters offering principal reductions or other modifications starting in June 2012.  This modification process will continue for approximately 3 years.

For loan modifications and refinance options, borrowers may be contacted directly by one of the five participating mortgage servicers. Keeping in mind the timeline above, you may contact the banks directly if you need additional information: