Posted on October 10, 2012 by populareconomicsblog

CoreLogic reported the current residential shadow inventory as of July 2012 fell to 2.3 million units, representing a supply of six months. This was a 10.2 percent drop from July 2011, when shadow inventory stood at 2.6 million units, which is approximately the same level the country was experiencing in March 2009. Currently, the flow of new seriously delinquent (90 days or more) loans into the shadow inventory has been roughly offset by the equal volume of distressed (short and real estate

“The decline in shadow inventory has recently moderated reflecting the lower outflow of distressed sales over the past year,” said Mark Fleming, chief economist for CoreLogic. “While a lower outflow of distressed sales helps alleviate downward home price pressure, long foreclosure timelines in some parts of the country causes these pools of shadow inventory to remain in limbo for an extended period of time.” 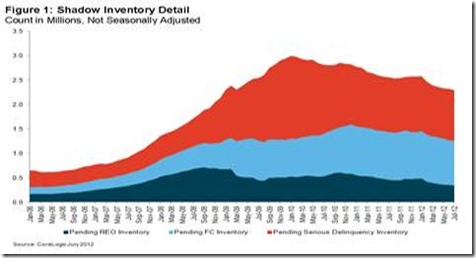 Corelogic said that home prices nationwide, including distressed sales, increased on a year-over-year basis by 4.6 percent in August 2012 compared to August 2011. This change represents the biggest year-over-year increase since July 2006. On a month-over-month basis, including distressed sales, home prices increased by 0.3 percent in August 2012 compared to July 2012.

So we see the Federal Reserve’s commitment to keep interest rates at historic lows for as long as it takes to revive the housing market, and bring down the unemployment rate to more acceptable levels, is already showing results.