Southland Home Sales Up, Foreclosures Down

Posted on November 15, 2012 by populareconomicsblog

Sales hit a three-year high for an October, rising 25 percent from the same month last year. The median sale price for a Southland house last month was $315,000, equal to September and up 17 percent from October 2011, according to DataQuick.

Gary Wood’s analysis of Santa Barbara County’s MLS sales including Carpinteria/Summerland, Montecito, Hope Ranch, downtown Santa Barbara and Goleta through October 2012 were similar. Sales rose to 100 from 83 in September. The median sales price also came up from $750,000 in September to about $815,000 in October with escrows rising from 94 to about 120 for the month. The median list price on those escrows showed the biggest upswing—going from $762,540 to almost $900,000. 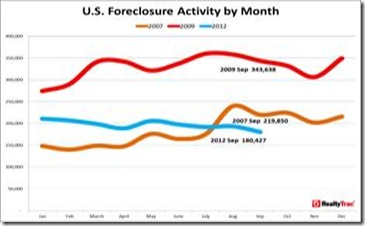 Foreclosure resales – properties foreclosed on in the prior 12 months – accounted for 16.3 percent of the Southland resale market last month. That was down from 16.6 percent the month before and 32.8 percent a year earlier. Last month’s level was the lowest since it was 16.0 percent in October 2007. The foreclosure resales had hit a high of 56.7 percent in February 2009 during the Great Recession.

The delinquency rate for mortgage loans on one-to-four-unit residential properties fell to a seasonally adjusted rate of 7.40 percent of all loans outstanding as of the end of the third quarter of 2012, a decrease from the second quarter of 2012, and a decrease of 59 basis points from one year ago, according to the Mortgage Bankers Association’s (MBA) National Delinquency Survey.

“Mortgage delinquencies decreased compared to last quarter overall, driven mainly by a decline in loans that are 90 days or more delinquent,” said Mike Fratantoni, MBA’s Vice President of Research and Economics. “The 90 day delinquency rate is at its lowest level since 2008, and together with the decline in the percentage of loans in foreclosure, this indicates a significant drop in the shadow inventory of distressed loans-a real positive for the housing market. The 30 day delinquency rate increased slightly, but remains close to the long-term average for this metric.  Given the weak economic and job growth in third quarter, it is not surprising that this metric has not improved. ”