Posted on January 17, 2013 by populareconomicsblog

Does Congress know that our federal budget deficit has been shrinking steadily since 2009, the end of the 18-month Great Recession? Yes, that’s right. A combination of cuts in government spending and very low interest rates on the public debt have been bringing down what is really an apples and oranges problem. Annual deficits are decreasing, but they still add to the overall public/private debt, much of which is held by the Federal Reserve in bonds they can sell back to the public when the economy improves sufficiently.

In the depths of the most recent recession, the fiscal year that ended Sept. 30, 2009, the deficit was 10.1 percent of gross domestic product, the value of all the goods and services produced. Since then, the deficit has declined to 9 percent of GDP in 2010, 8.7 percent in 2011 and 7.0 percent in fiscal 2012. Private analysts predict the deficit will be between 5.5 percent and 6.0 percent of GDP in fiscal 2013, says Calculated Risk quoting Wall Street Journal’s David Wessel. 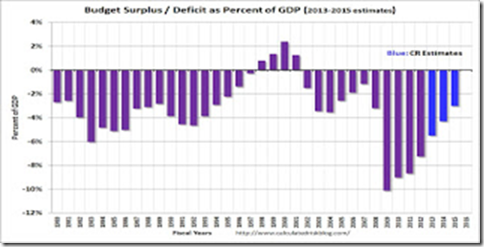 And bond investors must know this, since they keep buying Treasury Bonds, whose yields are hovering near all-time lows. The U.S. has no problem paying its bills, in other words. Inflation hawks have been crying inflation over the Federal Reserve’s bond buying program since the end of the recession. Yet interest rates, the best indicator of inflationary tendencies, continued to decline to their current lows.

That is why much of the outcry over the debt ceiling has been fabricated by those who want little or no government, who believe all government spending is for the 47 percent of ‘takers’, when in fact a large part of the government ‘largesse’ goes to the wealthiest to finance their tax breaks. Most of the federal debt comes from past spending, the spending run up since 2000 in fighting two wars, the Bush tax cuts, and recession. This is after 4 consecutive years of budget surpluses under President Clinton, as the graph shows.

The rest of government debt for the most part is intragovernmental debt, consisting of trust fund accounts that are credited with dedicated revenue such as Social Security and Medicare payroll taxes (FICA). In theory, any surpluses in these accounts are “saved” for future benefit obligations. As of the end of December 2012, intragovernmental debt (subject to the limit) totaled $4.831 trillion. Hence the grand total of federal debt is $16.4 trillion.

But we know how to pay it down. The Clinton Presidency showed us how. It is important to reduce government spending, particularly on defense, which is being done as the wars wind down. Another part is fostering job formation programs that increase tax revenues, as happened during the 10-year growth cycle of the 1990s, the longest growth cycle in our history. Twenty one million jobs were created just during the 8-year Clinton term.

In fact, history shows growth remains mediocre without government revenues to support it. This is not just to finance social welfare and senior pension programs. There is so much public infrastructure repair and upgrades that need to be financed at the state and national levels which private industry cannot initiate.

For instance, building our national highway system in the 1950s was a huge boost to growth, and there is a multi-trillion dollar deterioration of current public infrastructure. Much more needs to be spent on schools just to keep up with rising worldwide educational standards. This is not to speak of environmental protection, renewable energy, and research and development that only governments can instigate.

Americans do know how to foster growth. But it has always been due to the partnership of private and public sectors, something our current Congress seems to have forgotten.