Posted on January 3, 2014 by populareconomicsblog

Ben Bernanke is now defending his record as Fed Chairman. He shouldn’t have to, as without the Fed’s easy money policies—such as QE3—the economy would surely have plunged back into recession, as the European Union has done with its ongoing austerity policies. This is but the outcome of the Great Divergence in wealth that has occurred over the past 30 years, and why the Fed had to maintain its massive injection of money into the economy over such a long period of time. 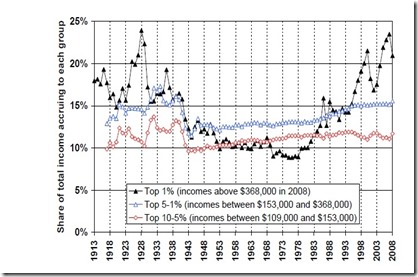 “Skeptics have pointed out that the pace of recovery has been disappointingly slow, with inflation-adjusted GDP growth averaging only slightly higher than a 2 percent annual rate over the past few years and inflation below the Committee’s 2 percent longer-term target,” Bernanke said at the American Economic Association annual meeting in Philadelphia. “However, as I will discuss, the recovery has faced powerful headwinds, suggesting that economic growth might well have been considerably weaker, or even negative, without substantial monetary policy support. For the most part, research supports the conclusion that the combination of forward guidance and large-scale asset purchases has helped promote the recovery.”

History will surely ask what the Great Divergence has done for America and Americans, when its results are assessed. As of now, we seem to have achieved very little for the long term, if anything—at least since 1980. Its rationale was that by transferring more wealth to investors and corporations, the suppliers of goods and services rather than the buyers of those products, would increase employment and household wealth.

But, alas, that didn’t happen. Employment was actually much higher when tax rates were raised under President Clinton, and growth was higher when governments spent more to stimulate growth, hallmarks of Keynesian policies, rather than the austerity policies that were the hallmark of the so-called supply-siders.

Perhaps its end result was the Great Recession, just as the Great Depression ended the Roaring Twenties period of excesses. We know that this Great Divergence resulted in reduced household incomes for all but the top 1 percent, record corporate profits as a percentage of GDP, and a personal savings rate that dropped to 0 during the runup to the Great Recession.

Nothing was done for the future, in other words. Two wars were fought that drained necessary resources from domestic priorities, reduced retirement pensions, environmental safeguards, and drove some large cities into bankruptcy.

Another result of the Great Divergence in wealth are the austerity policies that have gripped America and Europe since 2009, resulting in sky-high unemployment rates in some European countries, and increasing, rather than decreasing budget deficits. These policies, including opposing U.S. debt ceiling increases and across the board sequester spending cuts, are the direct result of those calling for ever smaller government, lower taxes and less social welfare spending—at a time when just the opposite is needed.

This is but a short list of damages done by the Great Divergence in wealth that cries for a resurgence of New Deal legislation and regulation.