So Fannie and Freddie Weren’t the Problem…

Posted on March 21, 2014 by populareconomicsblog

We are learning just how much mortgage fraud was committed by 17 national and international banks and other financial entities that the Federal Housing Finance Authority (FHFA) originally sued to recover some $200 billion in losses to the GSEs that it regulates, Fannie Mae and Freddie Mac.

This tells us where the real faults lies for the credit bubble that led to the housing bubble.  The once private stock corporations and now wards of the government, Fannie Mae and Freddie Mac, didn’t precipitate the housing bust.  They weren’t even the main issuers of faulty mortgages that imploded with the Great Recession. It was the federally-supervised commercial banks themselves that misrepresented many of the mortgages it sold to Fannie and Freddie, thereby giving them the cover of AAA rated assets, when they were much closer to junk bond quality.

Fed Chairman Alan Greenspan had lowered short term interest rates below what was the inflation rate at that time—some 3 percent—whereas his fed funds rate was as low as 0.5 percent.  (That meant if money was lent at below the inflation rate, it was basically free money because inflation would eat away at the amount owed so that it was actually worth less when paid off, or sold, than the face amount of the debt.)

And banks jumped into the housing bubble that resulted, almost ignoring the most basic lending safeguards from such ‘free’ money, such as verifying income and assets of the borrowers that Fannie and Freddie required.  In other words, Fannie and Freddie guaranteed that nothing was “stated” on the loan application that wasn’t verified.

The GSEs themselves were also at fault for allowing mortgage banks such as Countrywide Financial (acquired by Bank of America) to package and sell Mortgage Backed Securities to Fannie and Freddie that mainly consisted of negatively amortized ‘liar’ loans with very low initial payment rates, and little or no income and asset verification.  But that was a small portion of the defaulted loans, and in fact Fannie and Freddie guaranteed mortgages have far and away the lowest default rates.

Wall Street insiders now believe that up to $50B could be the tab to settle all the pending cases, according to the New York Times.  Some $1.96 Trillion in so-called private-label mortgages were issued by banks from 2005 to 2008 during the height of the housing bubble, according to the latest figures.

As of January, the FHFA has settled six of the private-label RMBS cases, recovering nearly $8 billion for taxpayers.  Whether due to a lack of adequate supervision, or outright fraudulent misrepresentation of the credit quality of those mortgages, these banks sold Fannie and Freddie mortgages that didn’t meet the strict credit standards of the GSEs. 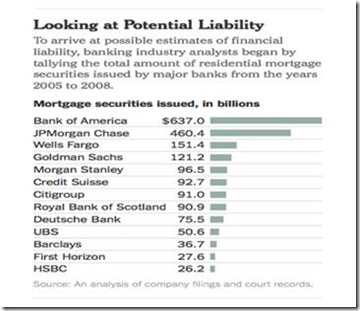 Banks such as JP Morgan Chase ($5.1B), Deutsche Bank ($1.9B) and now Credit Suisse ($885B) have settled, while admitting they had inadequate oversight.  But Bank of America and Goldman Sachs are holding out, so are going to trial sometime in midyear 2014.

Others that have settled include, GE (Ally Bank), United Bank of Switzerland and Citigroup.  They had failed to prove in federal court that the mortgages underlying their Mortgage Backed Securities sold to Fannie and Freddie were due to the busted housing bubble that caused the loss of some $5 Trillion in real estate values, rather than their faulty underwriting practices.

So don’t blame Fannie and Freddie for wanting to expand home ownership, as those who oppose government ownership or regulation of anything have contended, and seem to have convinced the Obama administration.  The GSEs were as much a victim of deceptive lending practices as the borrowers and homeowners who lost out due to the resulting Great Recession.

1 Response to So Fannie and Freddie Weren’t the Problem…