Posted on August 24, 2014 by populareconomicsblog

It looks like the US economy is kicking into high gear from its winter slump, as the Conference Board’s just released July Index of Leading Indicators (LEI) jumped 0.9 percent, the highest it’s been this year. It is a compilation of 12 leading measures of economic activity, such as interest rate spreads, employee hours worked that is a good predictor of future economic growth.

“The LEI improved sharply in July, suggesting that the economy is gaining traction and growth should continue at a strong pace for the remainder of the year,” said Ataman Ozyildirim, Economist at The Conference Board. “Although housing has been one of the weakest components this year, the sharp gain in building permits helped boost the LEI in July. Financial markets and labor market conditions have also supported recent gains, but business spending indicators remain soft and their contribution marginal.”

So real estate may finally be taking its place as a leading indicator of economic growth, as in past recoveries. Total existing-home sales, which are completed transactions that include single-family homes, townhomes, condominiums and co-ops, rose 2.4 percent to a seasonally adjusted annual rate of 5.15 million in July from a slight downwardly-revised 5.03 million in June. Sales are at the highest pace of 2014 and have risen four consecutive months, but remain 4.3 percent below the 5.38 million-unit level from last July, which was the peak of 2013.

Lawrence Yun, NAR chief economist, says sales momentum is slowly building behind stronger job growth and improving inventory conditions. “The number of houses for sale is higher than a year ago and tamer price increases are giving prospective buyers less hesitation about entering the market,” he said. “More people are buying homes compared to earlier in the year and this trend should continue with interest rates remaining low and apartment rents rising.” 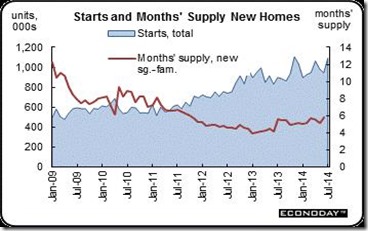 And housing starts for July jumped to an annualized pace of 1.093 million units-up from 0.945 million units the prior month. The latest number well topped expectations for 0.963 million units. July was up a sharp 15.7 percent (monthly), after dipping 4.0 percent in June.  July’s pace was the highest level since November 2013.

Employment is also showing the largest improvement, with weekly initial unemployment claims below 300,000 again, reports the Labor Dept. This could mean August’s jobs report due in two weeks might show another drop in the unemployment rate, now at 6.2 percent.

Jobless claims have continued to trend lower, pointing to month-to-month strength for the August employment report coming up in 2 weeks. Initial claims fell 14,000 to a better-than-expected level of 298,000 in the August 16 week, a week that is also the sample week for the monthly employment report. A comparison with the July sample week shows a 5,000 improvement. The 4-week average, at 300,750, is up 4,750 from the prior week but is down 8,500 from the July sample week.

Real estate has historically led recoveries, but because of the severity of the housing bust, hasn’t until now. That is the main reason many economists say growth has been in the 2 percent range since the end of the Great Recession. But if housing continues its recovery, we could see GDP growth rising at least another 1 percent. And with builder optimism and new-home sales also surging, this could happen.