Posted on March 4, 2016 by populareconomicsblog

Americans are going back to work, though mostly in lower paying jobs at the moment. That’s why those states and cities raising their minimum wage rate are so important for growth.

The U.S. added 242,000 new jobs in February, and 30,000 more jobs to payrolls over the past 2 months, with revisions. Why does this confute the naysayers that predicted an oncoming recession? Because consumers are buying again, with retail jobs up 54,900, and governments hiring again with all the public works and infrastructure projects in the works. Hence the 19,000 new construction jobs. 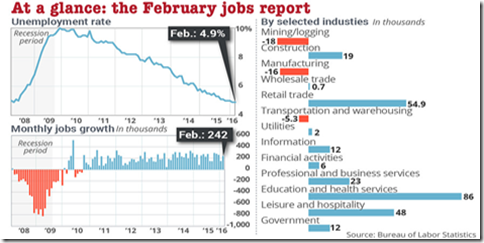 The increase in jobs last month is a sign the economy is picking up steam despite a rocky start to the year for stocks, mostly because of worries that a global slowdown could undermine growth at home. The jobless rate, meanwhile, was unchanged at 4.9 percent.

This is when the EU jobless rate is stuck at 10.3 percent, with Italy’s jobless rate at 11.5 and Spain’s at 20.9 percent respectively.

Even more remarkable was that the labor participation rate continues upward with 500,000 more workers entering the workforce in February and 2 million since. It really looks like Americans are going back to work; particularly those most discouraged, as more states raise their minimum wage.

Oregon is the latest state jumping on the bandwagon, with its minimum wage rising in increments to $15 per hour over 5 years. Another sign of strength was that temporary help services fell for a second straight month, down 10,000 following a 22,000 decline in January. Government added 12,000 to payrolls while construction, where spending is solid, rose 19,000, as we said. And this is even though mining and manufacturing jobs contracted, down 19,000 and 16,000 respectively.

The U.S. has created 12.7 million new jobs since 2011 and the unemployment rate has fallen below 5 percent. But workers still aren’t getting big pay raises. Though almost seven years into the recovery, wages have barely accelerated. Hourly pay fell in February, reducing the year-over-year increase in wages to 2.2 percent from a post-recession high of 2.6 percent two months ago.

And, the so-called U6 rate that includes people who can only find part-time work or have become too discouraged to look for work dipped to 9.7 percent from 9.9 percent and reached the lowest level since May 2008.

We maintain raising the minimum wage of lowest paid workers is important for several reasons. Firstly, health-care companies and social-assistance providers led the way in hiring, adding 57,000 jobs. Retailers beefed up staff by 55,000, and restaurants took on 40,000 new workers. This means more employed consumers to boost retail sales, which comprise half of consumer spending, and consumers now power some 70 percent of economic activity.

Raising the minimum wage also takes more lower paid workers off the assistance rolls (such as food stamps), and unemployment insurance, and even welfare, which improves our budget deficit, as well.

We may be entering a virtuous cycle of growth, in other words, in spite of the drop in energy prices. It means more money in the pockets of consumers, creating more demand for goods and services, which in turn creates more jobs, and economic growth.