Posted on September 15, 2017 by populareconomicsblog

The US Dollar’s decline against foreign currencies, mostly due to geopolitical worries such as N. Korea’s nuclear intentions, is already helping the manufacturing sector with a sharp rise in factory orders. This will be aided by Hurricanes Harvey and Irma’s boost in capital expenditures as major infrastructure upgrades will be necessary.

Any infrastructure improvements—such as roads, bridges, the power grid, water and sewer plants—enhances efficiency and job formation. It seems force majeure, or unavoidable catastrophes, are the only way our political parties seem to be able to agree on doing anything that boosts growth!

The factory sector has been slowly moving higher this year. Strength in aircraft has been a big plus but there are huge swings in monthly data. So the above graph excludes civilian aircraft and tracks both orders and shipments for all other manufactured goods. The story is one of recovery with growth moving to the solid 5 to 6 percent range after a long run of contraction tied to the 2014 collapse in oil.

The best factory news has been coming from the most critical area: core capital goods where strength reflects rising investment in future production. Orders have been strong two of the last three reports, up 1.0 percent in July and 0.8 percent in May. This will boost shipments over the next few months which are already on the rise, up 1.2 percent after June’s 0.6 percent gain. An upswing in capital goods is auspicious for the factory sector which itself is considered a leading indicator for the economy as a whole. 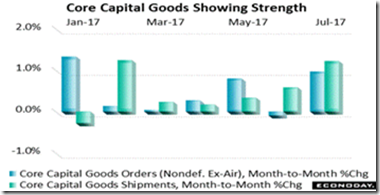 For all the damage they cause, these hurricanes will spur a gigantic rebuilding effort—maybe upwards of $200 billion in overall spending just to replace what was destroyed. That is 1/5 of President Trump’s original infrastructure proposal.

We have to start somewhere when our government can’t otherwise agree to rebuild our badly aging plants and equipment. The latest Job Openings and Labor Turnover Survey (JOLTS) report out today said there are 6.173 million job openings, and 5.5 million hires in August.

It is possible small business hires will pick up, as the National Federation of Independent Businesses Optimism Index rose 0.1 points in August to 105.3, matching the highest level since the 12-year high set in January. August’s optimism reflected increases in the proportion of small business owners planning capital expenditures and anticipating higher sales. Capital expenditures plans in the next 3 to 6 months reached their highest level since 2006, the NFIB said.

Now is the best time for these businesses (80 percent of hires are by small businesses) will try a little harder to hire more of those 6 million that are actually available and want to return to work.