Who Needs a Tax Cut?

Posted on October 27, 2017 by populareconomicsblog

It turns out very few of us need a tax cut. Marketwatch economist Rex Nutting calculates that those in the 60 percent middle-income brackets—from $32,000 to $140,000 per year—pay just an average 2.5 percent in income taxes. It’s only the richest 0.1 to 1 percent income earners that pay more, and want the huge tax cuts congress and the Trump administration are proposing. 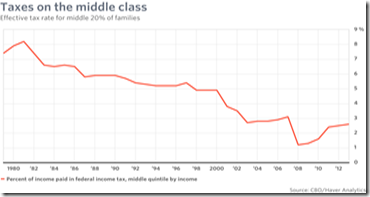 Their rationale? That it will boost GDP growth to 3 percent from the current 2 percent average since the end of the Great Recession. But guess what? Q2 GDP growth was already 3 percent in Q2 and just revised to 3.1 percent, the highest growth rate in 2 years. Q3 GDP growth was just reported today at 3 percent, due to higher consumer spending and Durable Goods orders on hurricane goods replacement.  Businesses are already investing in expansion, in other words—business investment in structures rose a stronger 7 percent instead of 6.2 percent in the revision. So, why not pay down the huge budget deficits accumulated since then, instead of cutting tax revenues?

“A bill that cuts federal income taxes for middle-class families makes absolutely no sense, except as a sad way of camouflaging the real intent of the bill: Giving millions of dollars to the very wealthy, who happen to be the only people who are really benefiting from our uneven economic growth,” said Nutting.

Because the budget deficit cannot be increased more then $1.5 trillion in ten years, due to prior budget agreements spending has to be cut somewhere, and guess where. Nobel economist Paul Krugman calculated $1trillion has to be cut from Medicare, and $500 billion from Medicaid.

Guess who is hurt most by those benefit cuts? Trump voters in the red states that depend most heavily on those health benefits. So, once again Repubs are attempting to disguise a tax cut for the wealthiest. A corporate tax cut also benefit the wealthiest, since the top 10 percent of income earners own 80 percent of stocks, which is where most of the benefits from their increased profits will show up. 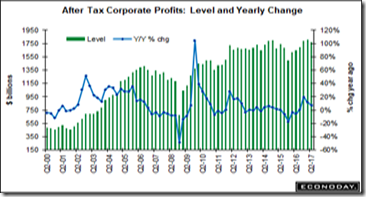 Top this off with another record for corporate profits, up 7.4 percent in a year, and there is no reason to be cutting their taxes. They haven’t been using their profits for productive purposes, so what’s needed is for them to pay higher taxes so government can use that money to invest productively in the $2 trillion plus in outmoded infrastructure that badly needs replacement.

As a bonus, any such investments in new airports, power grids, better water treatment facilities (such as Detroit’s), alternative energies, roads, bridges—you name it—will increase labor productivity that has been cut in half since 2000.

And increasing labor productivity is the only real ticket to higher economic growth, and increasing the take-home pay for those middle-income wage earners.