Posted on December 26, 2017 by populareconomicsblog

The Republican’s tax bill has passed, and it is the greatest theft of taxpayer monies in history; even greater than Presidents’ Reagan and Bush I and II tax cuts that began the immense transfer of wealth to the wealthiest in 1980, starving the government of much needed revenues that would keep the federal deficits under control.

It was written by the very lobbyists Republicans and the Trump administration have cultivated since his election. The stench of the DC swamp that Trump promised to drain has become overwhelming.

More than 130 lobbyists have been hired to work in the administration, and 36 of them have blatant conflicts of interest, working on the same issues they were lobbying on, in violation of Trump’s ethics rules, according to Marketwatch economist Jeff Nutting. 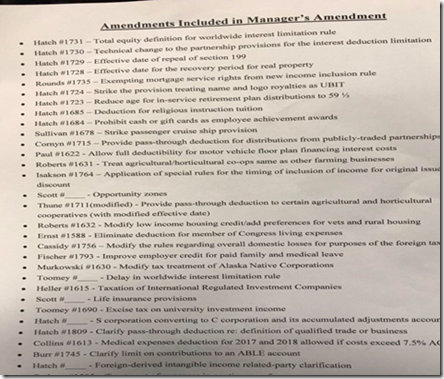 “This is so bad. We have just gotten list of amendments to be included in bill NOT from our R colleagues, but from lobbyists downtown,” said Missouri Dem Senator Claire McCaskill. “None of us have seen this list, but lobbyists have it. Need I say more? Disgusting. And we probably will not even be given time to read them.”

The bill will cut Medicare and Medicaid benefits by $1.5 trillion, and could add up to $1.5 trillion to the deficit in 10 years according to the CBO. That’s a $3 trillion outright theft from U.S. taxpayers that makes it the biggest heist in history.  It is why the top 1 percent of earners have garnered almost 100 percent of national income created since the end of the Great Recession.

As I noted in an earlier column, Harold Myerson said in The American Prospect, “The United States now has the highest percentage of low-wage workers – that is workers who make less than two-thirds of the median wage- of any developed nation. Fully 25 percent of all American workers make no more than $17, 576 a year.”

We know what has happened when Republicans tried this taxpayer heist before. President Reagan and congress has to raise taxes 11 times to make up the deficits created by the first ‘trickle-down’ tax cuts in 1981. Two consecutive recessions followed as Fed Chairman Paul Volcker raised interest rates to record levels at the same time.

Then GW Bush did the same in 2001-03, when he cut taxes again while paying for the wars on terror, resulting in the largest federal deficit in history at the time, and the Great Recession.

This will not generate enough tax revenue to pay for the additional debt, as I noted in an earlier column, so foreign governments and individuals will become more reluctant to invest in U.S. debt as the deficit continues to grow and interest rates rise, while crowding out other, important investments.

It can happen again. It is suicidal economics. The U.S. won’t declare bankruptcy. But it will saddle future generations with an impossible debt load, and prevent much needed public and private investment that would increase productivity and boost growth.