What Really Is Fair Trade?

Posted on August 30, 2018 by populareconomicsblog

Mexico is the third largest partner, with a -$71 billion trade deficit in exports vs. imports. The only partners with which the US has a trade surplus of exports over imports are Brazil and The Netherlands, ranked 12th and 13th, respectively, of the top 15 US trading partners.

The culprit is American consumers that now account for almost 70 percent of economic activity, versus 60 percent in the early 1980s, according to Bank of America’s Merrill Lynch analysts. 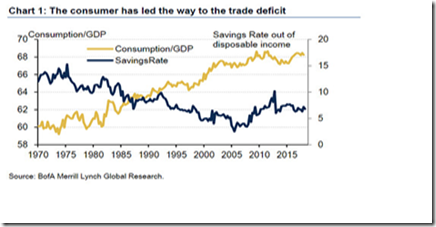 Consumers spend almost as much as they save, thanks in part to historically low interest rates that make it easy to borrow. The personal savings rate is now 6.7 percent and inflation is ticking above 2 percent, the Fed’s preferred inflation rate, so look for more interest rate hikes in coming months.

Why is President Trump picking a trade war with two of our top three trading partners that accounted for 29 percent of our trading volume in 2017? Is there a better way than a trade war to cure the deficit problem that doesn’t threaten to elevate prices further to an already escalating inflation rate?

Attempting to correct those imbalances is the major reason President Trump launched tariff wars with our largest trading partners. But he crippled himself at the same time by withdrawing from the 12-member Trans-Pacific Partnership—called TPP—at the beginning of his administration. Though it wasn’t perfect (didn’t boost US job formation), the trade alliance lowered tariffs on thousands of goods and gave US the power to oppose China’s unfair trade practices.

“E.g. TPP cut tariffs on 18,000 us products—to zero for $90b of US autos & $35b of IT, big cuts for US beef, pork, dairy, poultry, forced fairness for US service exports, established free intl movement of data, killed regulatory barriers to us export, limited state owned enterprises.

“And Mexico and Canada signed TPP so Trump’s nafta “deal” is demonstrably worse for the US than what Canada and Mexico already agreed to,” said Professor Goolsbee.”

The trade deficit has been with US since the 1970s, when roaring inflation and several recessions meant consumers wanted cheaper-foreign-made goods over those made in the USA, due in part to several Arab oil embargos that drove up oil prices and caused long lines at gas stations due to gasoline shortages.

On the macro (national) economic level, the US made it easy for American multi-national corporations to build their factories overseas with anti-labor policies that suppressed union collective bargaining and US wages, in their quest to expand international trade by opening US borders via lower import tariffs.

So a greater fair trade world would require major policy changes to correct the trade imbalances, needless to say. American consumers would pay more for Made in USA products and not always seek discounted foreign goods, for starters, if their incomes improved. They would then pay more taxes, increasing government revenues, which would lessen demand for massive federal government borrowing to cover the huge annual federal budget deficit that is projected to reach $1.5 trillion in 10 years.