Posted on November 2, 2018 by populareconomicsblog 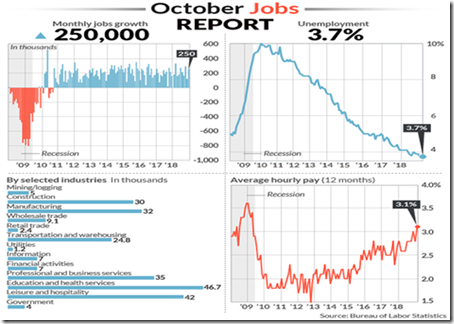 Total nonfarm payroll employment rose by 250,000 in October, and the unemployment rate was unchanged at 3.7 percent, the U.S. Bureau of Labor Statistics reported today. Job gains occurred in health care, in manufacturing, in construction, and in transportation and warehousing—in basically all sectors of the U.S. economy.

“The rapidly growing economy generated a sizzling 250,000 new jobs in October, keeping the unemployment rate at a 48-year low and pushing the increase in worker pay to the highest level in more than nine years,” said MarketWatch’s Jeffery Bartash.

The large increase in worker pay highlighted the unemployment report, as did government reports such as the BLS Job Openings and Labor Turnover Survey (JOLTS) that showed more than 7 million job openings, and a high Quits rate of voluntary separations that usually means workers are finding better jobs.

“The number of job openings reached a series high of 7.1 million on the last business day of August, the U.S. Bureau of Labor Statistics reported in October. Over the month, hires and separations were little changed at 5.8 million and 5.7 million, respectively. Within separations, the quits rate was unchanged at 2.4 percent and the layoffs and discharges rate was little changed at 1.2 percent.”

The 5.8 million hires really highlights the incredible jobs turnover rate each month in the $20.7 trillion U.S. economy. A major component of the unemployment report was the 32,000 new manufacturing jobs created in October that was highlighted in the BEA’s report on new factory orders.

“Up a higher-than-expected 0.7 percent, factory orders in October added to September’s very strong gain which is now revised 3 tenths higher to 2.6 percent,” said Econoday. “October’s increase for durable goods, also at 0.7 percent, is revised 1 tenth lower from last week’s advance report with orders for non-durable goods, which are the fresh data in today’s report, up 0.6 percent reflecting gains for petroleum and chemical products.”

Why the lowest unemployment rate in many years? A major reason is the percentage of able-bodied Americans in the labor force from the ages 25 to 54 rose to 82.3 percent in October from 81.8 percent in the prior month. That marks the highest level since April 2010.

How about interest rates? The 10-year Treasury Bond yield rose to 3.15 percent once again, and the Fed is sure to raise their Fed Funds rate another one-quarter percent in December to 2.25 to 2.50 percent, which means the Prime rate will go to 5.50 percent. That hasn’t dented consumer spending yet, but it might in the New Year.

What with the election uncertainty, trade wars, jittery financial markets, and an administration fearful of its own survival, we don’t see how 2018 can be much better.