What’s Behind Brexit and the Politics of Fiscal Austerity?

Posted on January 22, 2019 by populareconomicsblog 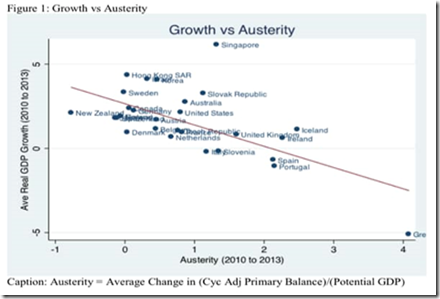 The case can now be made that Briton’s vote to leave the EU was because of wrong-headed fiscal policies in the aftermath of the Great Recession. The housing bubble affected Europeans almost as much as Americans after 2008, busting their asset bubbles with stock market crashes and large job losses. And the UK’s response was draconian; raise taxes while cutting back on social welfare programs that benefited the not so wealthy.

This was to be achieved by a combination of UK public spending reductions and tax increases amounting to £110 billion, which made their downturn worse than that of the U.S., because Fed Chair Ben Bernanke and the Democratic congress advocated easing credit and spending some $787B to boost infrastructure repairs and depleted state budgets in the American Recovery and Reinvestment Act of 2009 (ARRA).

The Tory government of John Cameron did the opposite with a vengeance; beginning in 2010 to brutally slash £21 billion from its welfare budget that took away essential benefits from a large number of UK citizens; who then voted for the Brexit referendum in 2016. Tories used the standard conservative trope that public spending took away from private sector investments that could revive the economy by creating new jobs.

That is not a proven economic theory, however, as conservatives have never wanted to admit that corporations and other private businesses tend to hold back a large part of their profits to buy back stock and thus boost the incomes of stockholders and CEOs, rather than invest it into further growth and more jobs. Instead, austerity became the conservatives’ excuse for shrinking government services at the wrong time.

This is documented by the results of research from a University of Warwick economist, Themo Fetzer: “These reforms activated existing economic grievances,” said Fetzer. “Further, auxiliary results suggest that the underlying economic grievances have broader origins than what the current literature on Brexit suggests. Up until 2010, the UK’s welfare state evened out growing income differences across the skill divide through transfer payments. This pattern markedly stops from 2010 onwards as austerity started to bite.”

This has also been the case with U.S. programs that were put into place when the Tea Party took over Republican politics and began the series of austerity measures in 2011 that included a prior government shutdown and caps on public spending.

The result in both countries was that it increased income inequality, which enraged the newly disenfranchised, non-college educated males, in particular, that were most affected by the Great Recession. Brexit advocates blamed the EU for it budget woes, claiming that withdrawal would bring home all those revenues that went to support less prosperous members of the EU, as a huge influx of Poles and other Eastern European citizens flocked into the UK and took away less-skilled jobs that many Brits believed they depended on.

Nobel Economist Paul Krugman in a 2015 Guardian article wrote perhaps the best known critique of austerity programs that were enacted throughout much of the developed world as a result of the Great Recession: “Since the global turn to austerity in 2010, every country that introduced significant austerity has seen its economy suffer, with the depth of the suffering closely related to the harshness of the austerity. In late 2012, the IMF’s chief economist, Olivier Blanchard, went so far as to issue what amounted to a mea culpa: although his organisation never bought into the notion that austerity would actually boost economic growth, the IMF now believes that it massively understated the damage that spending cuts inflict on a weak economy.”

Republicans, blaming the Great Recession on a bloated federal budget and too many regulations, attempted to cut almost all welfare spending, and even  abolish Obamacare when they controlled the House and Senate.

But now that Repubs have all the political power? They are creating record budget deficits and national debt with their tax and regulation cutting policies. That tells us austerity was just an excuse to redistribute even more wealth to the corporations and Wall Street; rather than Main Street.

But also, that Brexit is the result of misplaced ideologies, rather than tried and true economic policies.