Posted on January 24, 2020 by populareconomicsblog 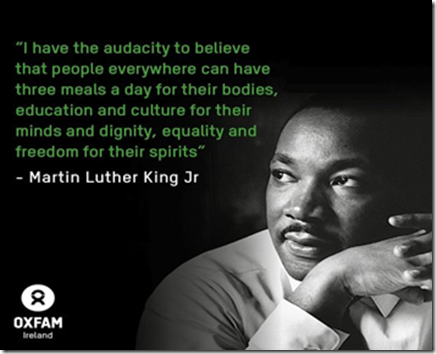 Martin Luther King, Jr. was assassinated on April 4, 1968, and his loss is felt even more than 50 years later as we continue to fight wars both foreign and domestic. He was organizing a march on Washington when he was killed. Who knows what might its effect have been on the Vietnam War if he had lived and mobilized America to end the war sooner?

King called it the Poor People’s Campaign, said a Daily Kos commentator on Monday’s Martin Luther King, Jr. Day. He wanted to dramatize the suffering of the nation’s poor by bringing them to the capital. Poor people would live together on the National Mall – the long strip of land between the U.S. Capitol and the Lincoln Memorial – and engage in widespread civil disobedience. King wanted to force the federal government to deal with poverty.

MLK gave a speech on 4 April, 1967 to over 3,000 at New York’s Riverside Church that is memorialized at Stanford’s Martin Luther King, Jr. Research and Education Institute. The speech was drafted from a collection of volunteers, including Spelman professor Vincent Harding and Wesleyan professor John Maguire. King’s address emphasized his responsibility to the American people and explained that conversations with young black men in the ghettos reinforced his own commitment to nonviolence.

“There is at the outset a very obvious and almost facile connection between the war in Vietnam and the struggle I and others have been waging in America,” said MLK. “A few years ago there was a shining moment in that struggle. It seemed as if there was a real promise of hope for the poor, both black and white, through the poverty program. There were experiments, hopes, new beginnings. Then came the buildup in Vietnam, and I watched this program broken and eviscerated as if it were some idle political plaything on a society gone mad on war. And I knew that America would never invest the necessary funds or energies in rehabilitation of its poor so long as adventures like Vietnam continued to draw men and skills and money like some demonic, destructive suction tube. So I was increasingly compelled to see the war as an enemy of the poor and to attack it as such….”

The TET Offensive of January 30, 1968 by the Vietcong had just happened, which made Americans first realize that we weren’t winning the Vietnam War. Robert Kennedy, then campaigning in Indianapolis, gave an impromptu speech on learning of his death:

Robert Kennedy was assassinated two months later on June 5, 1968, just after he was declared the winner in the South Dakota and California presidential primary of the 1968 election. It looked like he would ride the Kennedy tide to become President, instead of Richard Nixon, who managed to prolong the war until 1974 and his impeachment.

These were our visionary leaders of that time that we should remember for what they stood for—that one day we may realize their hope for a peaceful America.

Harlan Green is editor/publisher of PopularEconomics.com, and content provider of 3 weekly columns to various blogs--Popular Economics Weekly and The Huffington Post
View all posts by populareconomicsblog →
This entry was posted in Politics, Uncategorized and tagged martin luther king Jr, Robert Kennedy. Bookmark the permalink.